Get your headphones at the ready. GoodIdeas, the newest single release from Berlin-based duo bloodkneeves, is a shimmering slice of ambience that deserves your full attention.

An act who were never a friend to the spacebar, bloodkneeves have been busy of late, with their new track following on from last month’s more club-ready 4am Conversations. GoodIdeas, in turn, shows the duo’s more reflective side, in a return to the style that’s proved a successful formula through a number of releases since 2014.

An airy intro builds into a shuffling offbeat, reminiscent of British giants of the genre like Phaelah, Four Tet and Bonobo. Early dubstep influences are combined with a trip-hop sensibility, with the slick production showing that this is a group hitting a real vein of form. The xylophone motif adds to a hypnotic feel, making this a well-suited soundtrack to the early hour haze of a dingy Berlin bar.

Intricate, experimental, and rich in its instrumentation, this single marks bloodkneeves out as one to keep an eye on over the coming year.

You can find previous releases by bloodkneeves here, or by searching on SoundCloud, YouTube or Spotify. 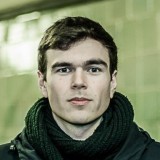 Luke began writing about music for his university paper while studying in England’s cold, post-industrial North. He became a regular reviewer of new releases, live shows, theatre and film, before moving to the big, grey blob of London. He has written indie and electronica reviews for indieBerlin since arriving in Berlin in 2017, while pursuing other freelance writing, editing and communications projects (and struggling to learn German). You can follow Luke here and read his recent reviews here.