Who Won What at the Listen to Berlin Awards 2019

Taking place at the Kesselhaus, it was the ideal location for such an event. The high stone heavily-graffitied walls contrasting with a glitzy and glamorous decor perfectly encapsulated the mood of the night– finding beauty and gems within the vast and gritty landscape that is the Berlin music scene. 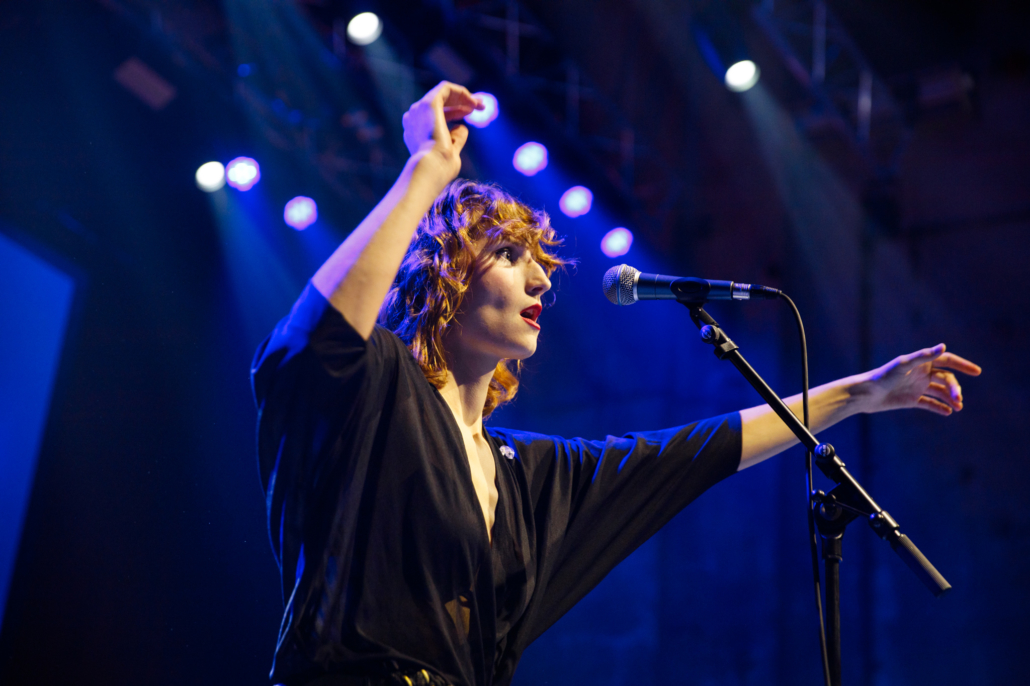 Azustra gets the show off to a wonderful start

Dozens of people were drawn to the spectacle with the place quite literally filled to the rafters. Some audience members sat on the stairs, or simply stood by the bar to watch the winners announced. These eager attendees were treated to a  performance in the build-up to the awards from the stunning Azustra, who wooed the crowd with her angelic vocals during her immersive performance.

Then it was showtime and on-stage emerged the hosts of the events – the fabulous singer and one of last year’s nominees, Melinda and independent music legend, Christoph Schrag, famed for his Fritz Unsigned radio show which has showcased hundreds of unsigned bands over its history. Despite being a non-German speaker, it was easy to see they did a fantastic job to keep the crowd amused and engaged over the course of the night- indicated by the regular laughter coming from those in the crowd who could comprehend what Melinda and Schrag were saying.

We caught up with the two hosts after the show to see what they thought of the evening and you can watch that here.

On with the award show, and the Prize for Promoting and Developing Music went to a 30-year veteran in the Berlin music scene, Gudrun Gut, who modestly thanked the crowd before making haste for the bar.  Following this, 90 Grad’s CGI-infused aesthetically-embracive and tripped-out video for Mine quite deservedly took home the best music video, before Mona Rubsamen picked up the prize for music journalism for her work in radio and print.

Later in the show, the award for the Top Creative Campaigns was given to Eze Wendtoin & Just People for Sage Nein (Konstantin Wrecker Cover), an emotive track and video/advert, which aims to combat discrimination in Germany. Ed Wendtoin himself marked the achievement with an impromptu acapella performance to the crowd after thanking Listen to Berlin for the acknowledgement.

It was a good night for Friends of indieBerlin also.

Ponte Pilas picked up the Audience Award for their track Eye for an Eye. This was one of the more sought-after awards due to it being the only award which the public could vote for and where the quartet was competing against all the other acts on the Listen to Berlin compilation playlist. It was a great achievement for the group made up of a Scottish lead-singer, Callum Bolland, also a reviewer for indieBerlin in his spare time, and Ecuadorians Daniel Rivera, Ismael River and Alejandro Iturralde, who, in true rock-and-roll fashion, detailed to us their plans of a night of excess to follow. 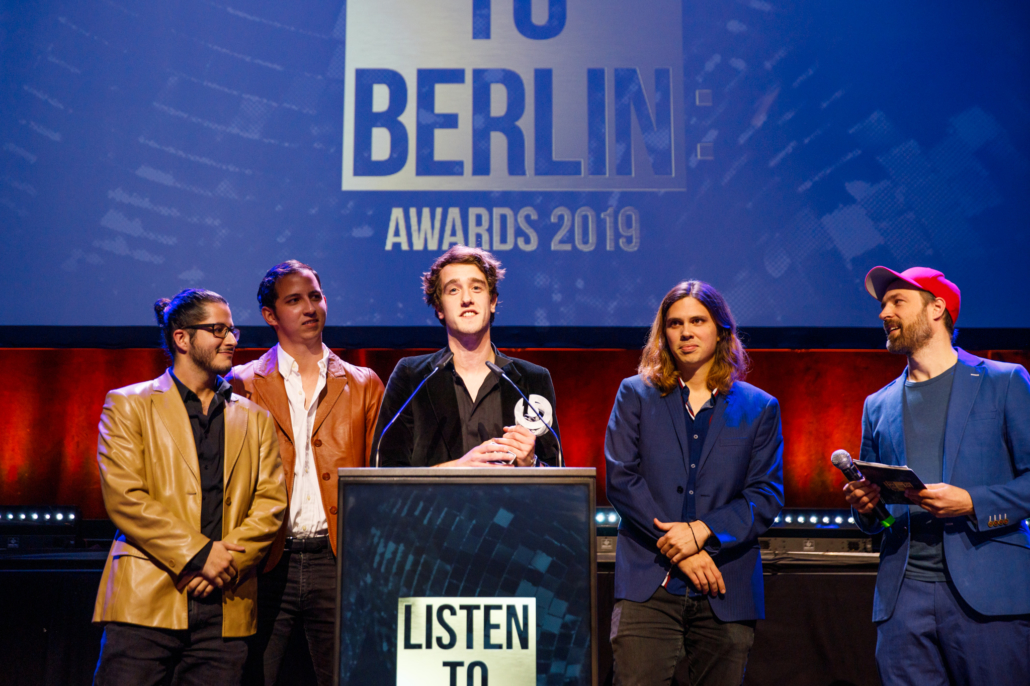 Although endearing pop-duo Nosoyo were pipped to the post by Pontus Pilas for this award, they picked up another illustrious top prize, the JuryPreis. This award is for special artistic achievement in Berlin’s musical scene and is chosen by the 16 strong Listen to Berlin Jury consisting of various industry experts.

For the charismatic duo, the award was one that was symbolic of their progress since moving to the city from Amsterdam a couple of years ago.

Speaking to IndieBerlin after winning the prize, the pop pair explained how this made them “feel finally accepted” after originally being somewhat anxious about bringing their unique poppy upbeat vibes to the edgy Berlin scene.

However, it was not all about the artists though and other initiatives were also given the spotlight.

Indivisible won the Rolf Budde Prize for Attitude in the Music Industry due to to their work combatting far-right politics in Germany. While Schwuz, a club which is somewhat of a bastion in the LGBT clubbing community, took the final award of the night, the Honorary Award, given to initiatives that have shown charisma in the music scene. 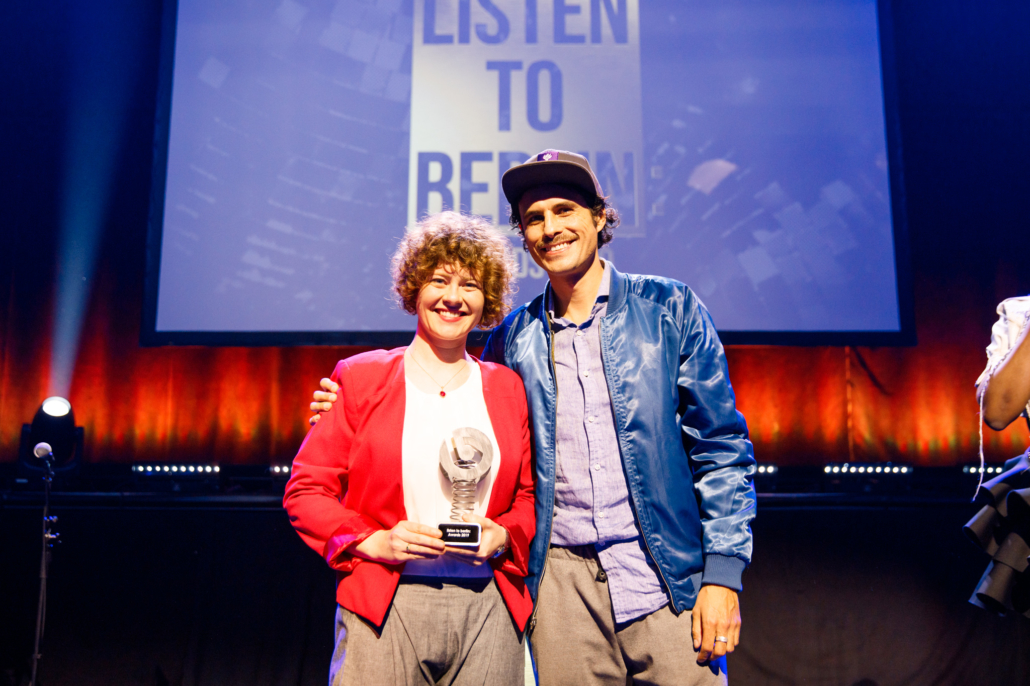 Konstanze Meyer picks up the Sustainability award for Clubtopia

Earlier in  the evening, another venue, Clubtopia had won the prize for sustainability, awarded to groups and organisations that have made an ecological impact and helped to reshape the music scene in an environmentally friendly way.  Konstanze Meyer, The Project Leader of Clubtopia spoke to us after the win. “It’s a great motivation for us to continue and keep doing what we are doing and keep on supporting clubs and becoming greener, eco-friendlier, and more climate-friendly!”

Once again, the Listen to Berlin awards was a tremendous event, whereby the acknowledgement of the winnings artists and venues was massively appreciated, showing once again why it is such an anticipated event in Berlin’s independent music scene calendar.

On the night, IndieBerlin was able to speak to many winners on a camera at the event. The video of this should go live on our website and socials later this week. While the following two days, we were at the Most Wanted: Music conference, our coverage of which you can read here!